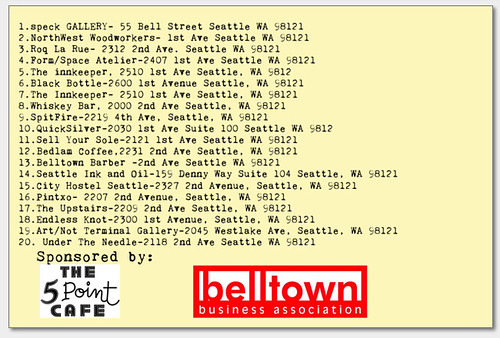 Belltown historically has had a culture filled with “artists, musicians and entrepreneurs.. establishing a thriving mini-Soho colony of studios, galleries, cafes, and clubs.” And we see that culture resurfacing recently, especially with the additions of Bedlam, where the artist community congregates to drink coffee and dream, and of City hostel Seattle, which is an amazingly creative space where artists were given free reign in each room to create whatever they wanted and this resulted in a space unlike any other that I’ve seen.

And most recently, to accompany other stand alone galleries like Roq La Rue, we saw the opening of speck gallery. I was fortunate enough to go to her private opening party, and let me tell you, everything about her is like a min-soho artist colony. Alex, owner and curator of the gallery, created speck from an unused stairwell with mile-high walls. The gallery space is simple, with a dash of class (a beautiful chandelier). And the art is worthwhile.

At the gallery opening I spoke with two artists that have pieces showing at speck, who also have pieces showing at the gallery at SAM, Nichole Dement  and Stephen Rock. Nichole’s piece at Speck is something that you have to see to believe. It is of a woman and is printed on rice paper in a lengthy process and then her face is covered with Nichole doing her art thing. (excuse my hilarious summary, I’m sure that Alex can describe the intent of this piece more eloquently than I- Just ask her tonight) It is profoundly beautiful. If you look at a computer screen all day, check out Stephen’s Exaggeration of Data work, a piece from this collection is also currently showing at Speck.

Alex (owner and curator of speck, 18(on and off) year resident of Belltown and former resident of NY) embodies the historic culture of Belltown that is written about above and she brings it into her gallery and into this neighborhood. She is as much a part of the gallery as the art is. And I am increasingly excited to see this movement of people like the guys at Bedlam, Lee from CHS, and Alex from Speck (among so many other people in this neighborhood) putting down roots in the artist community to help make Belltown continue to be the best place to live in downtown Seattle.

Check out the Art Walk Tonight. Don’t miss any of the places that I wrote about above. And add The Upstairs, Form Space Atelier and The Inkeeper to that list.