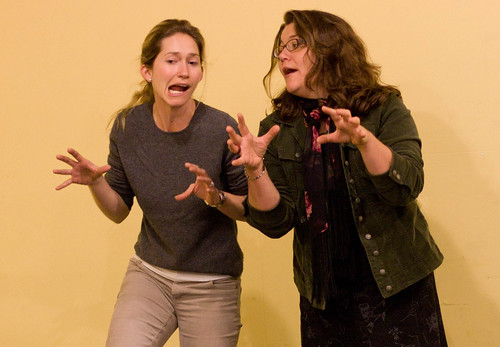 Freehold Theatre Lab/Studio, located in Belltown, offers a range of extraordinary acting classes including beginning acting classes.  For over 20 years, Freehold has offered year round acting classes all taught by working professional actors, directors and playwrights.  If you are looking for exceptional training in a supportive atmosphere, Freehold is the place.

Step I: Intro to Acting with Meg McLynn

At Freehold, we believe that acting is a process that can be learned and practiced by anyone at any age. In the Intro class, you develop fundamental acting tools: playing an action, living truthfully in imaginary circumstances, and working with a partner. No matter your experience, you learn acting in an exciting and safe environment. This is the first class in our three-step acting progression, introducing you to a vocabulary and approach that will be the basis of Step II: Acting with Text and Step III: Basic Scene Study.

Meg McLynn is an actor and singer who has travelled to all 50 states and performed in many of them.  Favorite roles include Miss Julie, Medea, Masha (Three Sisters),  Celia (As You Like It), and Deborah (A Kind of Alaska).  New York credits include Classic Stage Company, HERE Arts Center, The Ohio, The Mint, Theatre for a New City, Saltbox Theatre Workshop and others.  Locally, Meg has been seen at Tacoma Actor’s Guild, Consolidated Works, Theater Schmeater, Theatre Off Jackson, The Bathhouse, plus she has originated roles in the musicals “We Are NOT Good Girls” and “Diana Moves” as well as several productions with EXITheatre.  She was also a member of Seattle Women in Rhythm & Blues.  As a teaching artist, Meg spent seasons working with Open Door, Idaho Shakespeare, and Living Voices, with whom she also worked as New York Associate Director.  She has assisted with voice training at Columbia Business School and World Leaders Forum.  Meg studied voice and speech for 7 years under Kristin Linklater, and she also studied at Columbia University with Anne Bogart and members of SITI Company, Andrei Serban, Niky and Ulla Wolzc, and Larry Singer.